There's a giveaway running on Goodreads right now. Win a free copy of DEEP AS A TOMB:

I'm also revising what's not quite a sequel to DAAT. A major character from DAAT appears as an important secondary character in the one I'm working on. A beta reader said the stakes needed to be higher, so I'm getting ready to kill a character, which I always enjoy doing. Is that wrong? :-)

I'm reading the second book in Rachel Caine's Ink and Bone series. Really good YA fantasy based on the premise the librarians hold all the power in this world. Like power holders everywhere, that can be a problem.

I just finished Liane Moriarty's Truly, Madly Guilty. It drove me crazy for a while by withholding information that some of the POV character had, so it felt like I was being teased. But I still enjoyed it.

I stopped reading and threw away two different YA books in the last few weeks. They annoyed me.

The cover artist for Deep as a Tomb has created a beautiful map of the Shire. It's for sale here:

There's a Goodreads giveaway of DEEP AS A TOMB running until November 4. No obligation, but if you're interested, just click.

DEEP AS A TOMB is still available only in paperback, but Amazon has it discounted to $12.94 for some reason. And you have the chance to leave the first review! First! First = winner!

Also, I posted a new chapter of "The Enemy Within" on SoA and ff.net.

DEEP AS A TOMB is now up on Amazon, though the cover pic still isn't showing. It's YA fantasy with murder, betrayal, and some smooching. Not every book is right for every reader, but if this sounds right for you or someone you know, buy, read, review, fanfic, whatever! With a small press, the writer's biggest problem is helping the right readers find the book.

I sent some bookmarks for DEEP AS A TOMB to the printer today. The cheapest rate gave me a thousand of them so if you want some, PM me a US address and I'll send you as many as you want. Give them out in class! Put them in swag bags! Foist them on trick or treaters!

I've read a couple of good MG books lately. Lauren Wolk's WOLF HOLLOW is a powerful book about guilt, responsibility, the rippling effects of malice, and the loss of innocence. The narrator is a woman looking back on events that happened when she was 12, living happily on a farm during WWII. Apparently Wolk wrote it as an adult book and the publisher talked her into releasing the book as middle-grade fiction. Frankly, I found the book so tense that I'd have been traumatized by reading it at, say, age 10. It's extremely well done though. I recommend it.

I also read THE BLACKSTONE KEY by Kevin Sands. It's a middle grade book set during the Restoration, and it's a good read for adults as well as kids. It's interesting to see how some MG and YA books cross over to adults well and some don't. I don't know what the difference is. In this book, an apprentice apothecary and his friend break codes to solve a mystery.

I also read a good YA book, E. M. Kokie's RADICAL, which is about prepper culture. It's in first person, and that can make it hard for a writer to convey details about the MC, who's unlikely to be narrating about themselves. In Chapter 1 of RADICAL, Kokie does a clever thing with that problem. I like clever. It's a timely book, given the growth of the Sovereign Citizen movement and the paranoia that leads a small number of people to amass a large number of guns.

Now I'm reading the new Louise Penny mystery. This series is set in a small town in Quebec and has a wonderful sense of place.

I've been doing what feels like a last round of revision for a new book. I've worked on this on and off for a while so you may have heard me talk about it before. The MC is a 15-year-old boy who's marooned on the streets of a quasi-medieval city. To earn a few pennies, he pretends to be able to tell fortunes. Then he accidentally tells a true fortune for the prince and is taken into the palace to be the royal fortune teller. Good news: food and a warm bed. Bad news: He can't tell fortunes.

Anyway, when I revise, I run into two issues over and over. (1) My enjoyment of humor often leads me to undercut the story's tension with a joke. (2) I have a hard time being mean enough to my characters. Actually, undercutting tension with humor may be part of #2 too. I'm uncomfortable when things get bad. Also I tend to lay out my plot first, and while concentrating on it, I skim over the real emotions a real person would feel in the situation. So I have to go back and think about those and make them clear and real.

Here's the cover for the YA fantasy I have coming out in November from Loose Leaves Publishing. Gorgeous, no? 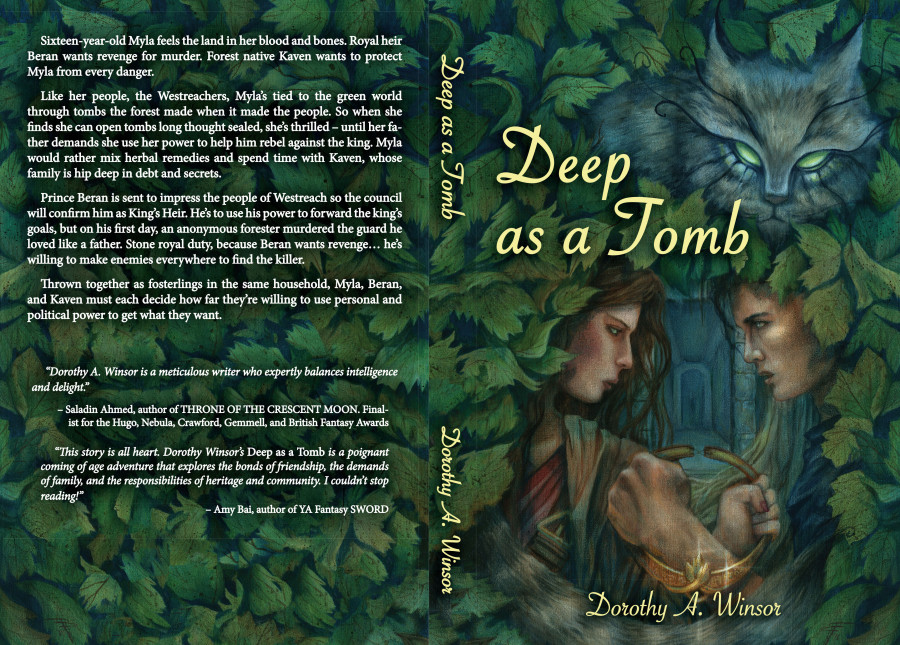 As a follow up to what I posted yesterday, when Zharmae closes at the end of August, my rights revert to me and I will put the e-book for FINDERS KEEPERS back up on Amazon. I've put a e-book short story up there, so I know how to do that.

I'm uncertain if I'll create a paperback because I don't know how hard that will be. My point is if you want to be sure to get a paperback, you need to buy it before the end of the month.

In the meantime, I'm writing promotional material for DEEP AS A TOMB, revising a book tentatively titled THE WIND READER, and reminding myself of how to self-publish FINDERS KEEPERS. I am leaning new stuff. Yay!

Fun moments in small press publishing: the publisher of my first novel is closing its doors at the end of the month. All rights revert to me, so I think I’ll self-publish that one. In the meantime, my shiny new publisher is forging ahead with the book due out in November, which takes the sting out a little.

OTOH, I was just on the phone with a beta reader talking about a book I'm drafting, and she cried when she talked about my ending. :-)
Collapse